Switzerland and the US come first and second in terms of increases in wealth per adult, respectively, while the total number of millionaires rose by 1.1 million worldwide to reach 46.8 million this year, according to an annual report by Credit Suisse. The study also suggests that wealth inequality within nations has declined since the start of the century, bucking conventional wisdom.

The Alpine state saw a $17,790 gain in wealth per adult, followed by the US , Japan and the Netherlands . The main loser was Australia largely due to exchange rate effects, with other significant losses in Norway , Turkey and Belgium .

Global wealth grew during the past year by 2.6 per cent to $360 trillion and wealth per adult reached a record high of $70,850, 1.2 per cent above the level of mid-2018. The US, China and Europe contributed the most towards global wealth growth with $3.8 trillion, $1.9 trillion and $1.1 trillion respectively.

Out of the rise in global millionaires, the US added more than half of this number – 675,000 new millionaires – to its already-sizeable stock, the report said.

On the flipside, the decline in average wealth in Australia resulted in 124,000 fewer millionaires, but losses were relatively modest elsewhere, such as down 27,000 in the UK and 24,000 in Turkey, the report, produced by the Credit Suisse Research Institute, the bank’s think tank, said.

The data, while not without examples of problems in some countries, paints a relatively rosy picture for wealth managers hoping that recent economic uncertainties and geopolitical issues such as US-China trade could squeeze the pipeline for clients. Beyond all the noise, however, it looks as if the numbers will be positive for wealth creation this year. The MSCI World Index of developed countries’ equities shows total returns, in dollars, of 18.5 per cent . 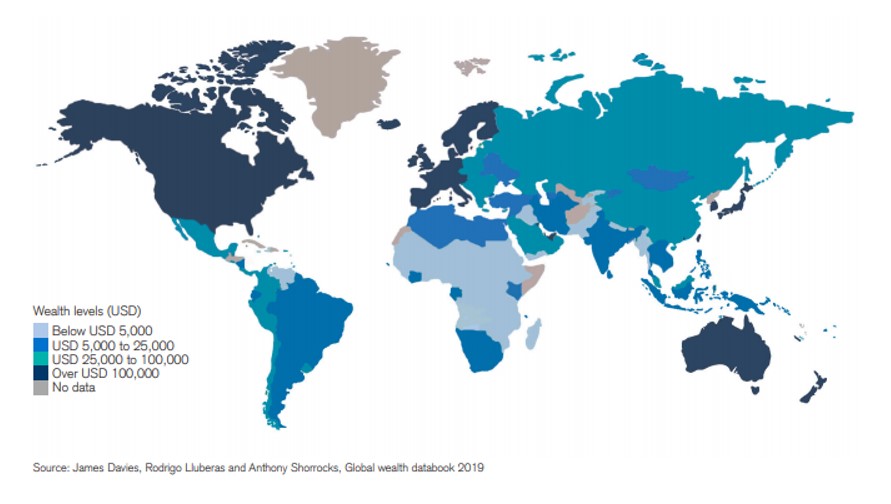 This year, for the first time, China recorded more members of the global top 10 per cent than the US .

In a finding that goes against assumptions of widening inequality, the Credit Suisse report said that wealth inequality actually shrank within most of the countries during the early years of the century. Today, the share of the bottom 90 per cent accounts for 18 per cent of global wealth, compared with 11 per cent in the year 2000.

“While it is too early to say wealth inequality is now in a downward phase, the prevailing evidence suggests that 2016 may have been the peak for the near future,” the report said.

The report said that 2.9 billion individuals – 57 per cent of all adults in the world – have wealth below $10,000 in 2019. The next segment, covering those with wealth in the range of $10,000–100,000, has seen the biggest rise in numbers this century, trebling in size from 514 million in 2000 to 1.7 billion in mid-2019. This reflects the growing prosperity of emerging economies, especially China, and the expansion of the middle class in the developing world. The average wealth of this group is $33,530, a little less than half the level of average wealth worldwide, but considerably above the average wealth of the countries in which most of the members reside.

Women’s wealth
Women’s wealth has grown relative to that of men in most countries due to rising female labor force participation, more equal division of wealth between spouses and other factors.

The report said that a paradox of tax policy from the first half of the 20th century was that it squeezed women’s wealth. “Traditionally, inheritance has been a more important source of wealth for women than for men - partly because lower incomes restricted accumulation on their own account, partly due to widowhood, and partly because females hold on to bequests longer than male heirs because they tend to live longer. The reduced flow of inherited wealth over the first half of the 20th century tended to lower the relative wealth of women due to their greater dependence on inheritance,” the report said.

Millennials “have not been a lucky cohort”, the study said, noting that they were hit at a young age by the global financial crisis, its associated recession and the poor job prospects that followed, but they have also been disadvantaged in many countries by high house prices, low interest rates and low incomes, making it difficult for them to buy property or accumulate wealth.

The report predicts that the number of millionaires will reach almost 63 million in the next five years, with global wealth projected to rise by 27 per cent over the next five years, reaching $459 trillion by 2024. Low-and middle-income countries are responsible for 38 per cent of the growth, although they account for just 31 per cent of current wealth. Growth by middle-income countries will be the primary driver of global trends.

The number of UHNW individuals will reach 234,000, the report said.

“Global wealth grew during the past year but at a very modest rate of 2.6 per cent. This low growth is partly attributable to US dollar appreciation: using five-year average exchange rates, total wealth grew by 5.9 per cent since end-2017, and wealth per adult by 3.8 per cent,” Anthony Shorrocks, economist and report author, said.