A number of forces are driving M&A deals in the US registered investment advisor space and a study examines how certain types of business are gaining an edge.

The median valuation for registered investment advisor M&A transactions rose by 21 per cent in 2020 from a year before as deals increased, figures show, with larger acquirers benefiting from scale and track record. It is unclear, however, if multiples paid for transactions will continue rising at the same pace as over the past five years.

Data from organizations such as ECHELON Partners and DeVoe show a red-hot market for wealth management deals in the RIA space (although so far there have been relatively few among firms - such as multi-family offices - serving ultra-high net worth clients).

While it is much harder to enter the market as a buyer, 65 per cent of potential sellers prefer a local or regional partner. The spoils will go to acquirers with a well-defined approach to inorganic growth or a platform that enhances front, middle, and back-office capabilities, argues Advisor Growth Strategies, a group that has polled industry figures from December 2020 to March this year about the market. It tracked 33 transactions last year, comprising a total of more than $60 billion in assets under management. Deal volume rose 4 per cent in 2020, the reportâs survey participants said. A total of 130 RIA deals took place last year.

The multiple paid in deals is based on earnings before interest, taxation, depreciation and amortization. The reportâs authors said that since it first studied such deals in 2019 (based on deals completed between 2015 and 2019), the median adjusted EBITDA multiple rose almost 60 per cent. The report said that it doesnât expect multiples to keep rising at the same pace, however. 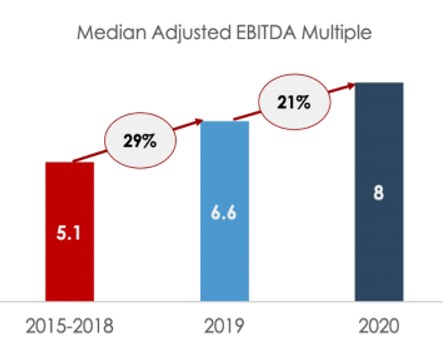 The RIA is becoming more concentrated, with the largest players holding a larger share of AuM, it said.

â2020 was a pivotal year for the RIA industry. RIA M&A started the year at a record pace, and all signs pointed to continued success. At the end of 2019, the total number of RIAs increased slightly, and the RIA channel also became more concentrated as 67.2 per cent of AuM was controlled by 6.4 per cent of RIAs. Overall, the industry was more successful, and 2020 shaped up to be another busy year for RIAs for familiar reasons,â the groupâs report, sponsored by BlackRock, said.

All participants covered in the survey said that they intend to do more deals this year than in 2020. And, ironically, they said working-from-home arrangements meant fewer distractions, actually helping more deals take place.

Battle lines have been drawn between integrators growing a single, dominant brand, and investors who offer more autonomy and flexibility, the report said. The average 2020 transaction showed an increase in cash. Sellers took less contingent risk and instead gained substantial upside opportunities. Initial valuations tended to improve by 20 per cent or more through âearn-moreâ provisions, it said.

âItâs clear 2020 was a breakthrough for RIA M&A valuations, diversity in structure, and new market entrants. As we look ahead to 2021 and beyond, we can expect the robustness of the market to continue, John Furey, managing partner at Advisor Growth Strategies, said. âFirm owners should take the time to understand the market opportunities as the industry has transformed itself over the last few years.â

Pandemic gyrations
As already reported, last yearâs onset of the COVID-19 pandemic squashed deals initially, bringing them to a halt in the second quarter of 2020 before the market resumed. The report noted that outside institutional capital continued to pour into the RIA space.

Clients of Advisor Group Strategies said it is hard to find new contributors and 25 per cent of survey respondents in the report said finding new talent is a top priority this year.

The vast bulk of RIA deals tend to be among firms serving mass-affluent/HNW clients, and havenât yet greatly affected those serving clients further up the wealth spectrum. In a forthcoming interview with wealth management industry consultant Jamie McLaughlin in this news service, he notes that there are a few exceptions to this, such as involving Tiedemann (Presidio, Threshold); Pathstone (Federal Street, Convergent, Cornerstone), and Fiduciary Trust International (Athena Capital Advisors). McLaughlin argues there are several barriers to M&A in the multi-family offices space: As partnerships they have no capital per se other than their free cash flow. Partners can choose to compensate themselves or reinvest their annual distributions in the business; few have achieved âscaleâ as measured simply by operating leverage; the aging of key principals and their clients, who tend to be their contemporaries, implies a further diminution of firm valuations; due to the idiosyncratic nature of their clientsâ needs, it has proven very hard to replicate work processes and/or leverage technology; and organic growth has also proven to be longer-cycle so firms' cost-of-acquisition tends to be higher. (See the full interview on May 24.)

The Refinitiv Deal: What It Means For Wealth Management